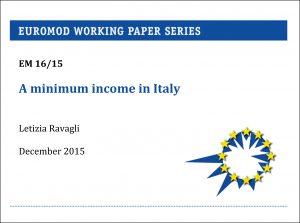 Due to the worsening of economic crisis across European countries, the problem of poverty and the ways to tackle it returned at the centre of political and scientific debate. The level of poverty increased after the crisis, especially in Mediterranean countries such as Italy, Spain and Greece. One of the main measures to protect individuals against poverty and social exclusion is Minimum Income (MI). Since 1992 the European Commission, with the Council Recommendation 92/441/EEC, called for the introduction in all Member States of a guaranteed MI. In 2010, as part of the Europe 2020 Strategy, a resolution of the European Parliament emphasized the role of MI in fighting poverty and promoting an inclusive society. Almost all EU countries adopted a MI with different rules and approaches, but Italy still lacks a universal form of protection against poverty and social exclusion. Accordingly, this paper has two main aims: first, to study European experiences of MI; second, to estimate costs and benefits of a proposal for a MI in Italy. In order to achieve these goals EUROMOD, the tax-benefit microsimulation model for the European Union, will be used.

The paper is the result of a period of research developed at ISER (Institute for Social and Economic Research) University of Essex (UK). The research leading to these results has received support under the European Commission’s 7th Framework Programme (FP7/2013-2017) under grant agreement n°312691, InGRID–Inclusive Growth Research Infrastructure Diffusion. The results presented here are based on EUROMOD version G1.0+. EUROMOD is maintained, developed and managed by the Institute for Social and Economic Research (ISER) at the University of Essex, in collaboration with national teams from the EU member states.