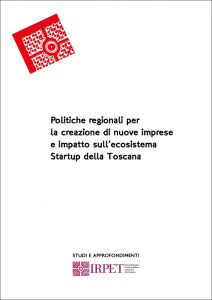 The aim of the present research is to provide a clear picture of the business startup policies implemented in recent years, with a particular focus on the part played by the regional administration of Tuscany. The impact of such policies is analyzed with reference to the two main recipients composing Tuscany’s startup ecosystem, that is the local business incubators, as providers of high added-value services, and the new businesses, which were brought into being thanks to the support services received at the onset and then in the acceleration phase. The report, based on the evidences collected, produces a “decalogue” of best practices for the incubating institutions and draws some policy implications. It is divided into four parts: the first investigates the system of policies in support of new business creation; the second examines the incentives and interventions operationally derived from such system; the third is centred on the analysis of business incubators; finally, the fourth part considers the incubated businesses and their survival rates.