6 July 2016
In Uncategorized
in Macroeconomics, Tourism
0 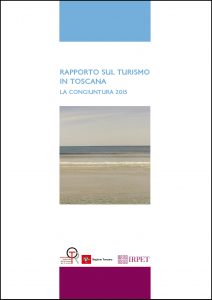 The report analyses the tourism trend in Tuscany for 2015 and traces its evolution for 2016. Two-thousand fifteen has certainly been a good year. Tourist arrivals experienced a 3.1% increase, strengthening the previous year’s outcome (+2.9%), and tourist presences also intensified (+2.9%), more than doubling the rise of 2014. Once again, the Tuscan performance has overtaken that of the whole peninsula, where the overall increase of arrivals was 2.7% and of presences 1.9%. Growth has been mainly driven by foreign visitors (+3.5% of presences), especially from non-European countries, but an improvement has also been recorded for the Italian (+2.2%), and particularly the Tuscan market (+4.1%), after a few years of decline in tourism consumption due to the effect of crisis on household income. Expectations for 2016 call for a consolidation of growth at the 2015 levels, even though some uncertainties remain, such as the repercussion of terrorism and Brexit on international tourism, and the possible implications of Italy’s growth slowdown on domestic tourism demand.