20 October 2016
In
in Local development, Territory and transports
0 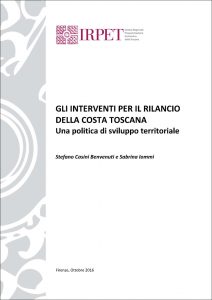 The Tuscan coastline, a territorial partition characterized by a development gap from the region’s productive heart, i.e. the central area, gravitating upon Florence and its metropolitan belt, has received increasing attention in the economic analysis and in the political debate. Although in general the whole coastal zone shows a worst performance as compared to the central metropolitan area, it is obvious that it does not constitute a homogeneous territory, but it is separable into local areas with higher or lower levels of criticality and different development potentials.

The present work, starting from the recognition of a shortage of employment opportunities in the coast, aims to identify the strengths and weaknesses of the different areas and suggest investment plans in line with more advanced development environments. These would not imply “starting from scratch”, but rather requalifying and improving the existing conditions, with a particular attention not only to the “quantitative” aspects of development (jobs, incomes) but also, and necessarily, to sustainability and quality of life.