15 November 2016
In Publications
in Macroeconomics
0 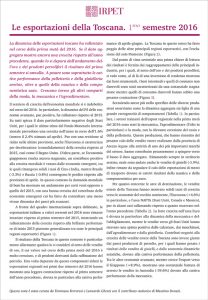 After some difficult years, in 2015 Tuscany has reported a growth of the GDP generated by the production system. The result (+1.1% in the region), is again characterized in this year by a positive discrepancy compared to the national average figure (+0.8%), which is nonetheless positive for the first time since 2011.

This achievement, albeit not so consistent, must certainly be welcomed. Such a growth of the Tuscan economy, which on the one hand is consistent with the assumed recovery revealed by the forecasts of last year’s Report, on the other signals how the economic system has managed to take advantage of favourable conditions, overcoming the uncertainties and the obstacles still present during the year 2015. In this respect, the elapsed year really does show signs of the region’s vigorous economy, despite the long period of stagnation, and of its enduring resilience, although weakened by the long season of negative trends. Let’s see which are the distinctive characteristics of this result.