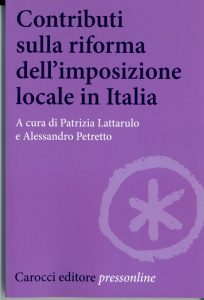 In recent years, the local tax system has been the object of a series of diverse regulatory provisions, alternatively based on decentralization and re-centralization, a fact which is calling into question the overall consistency of the present organization.
Given the need to simultaneously achieve high primary surpluses and keep the tax burden under control, on account of the country’s financial difficulties, both the political forces and the people at large have lately reconsidered the role of the local tax system, and even shown a manifest distrust towards fiscal autonomy itself.
In view of the above, the designing of a well-ordered local tax system has become a structural problem, which sooner or later will have to be dealt with and unravelled. The different essays collected in this volume address this issue, following the common thread of a more general reorganization that improves the horizontal equity and vertical harmonization of the current architecture of the tax system, on the precondition that in the resulting model of decentralized government, local bodies will be granted both expenditure responsibility and autonomy in income.