16 February 2017
In Tuscany in figures
in Public economics, Taxation
0 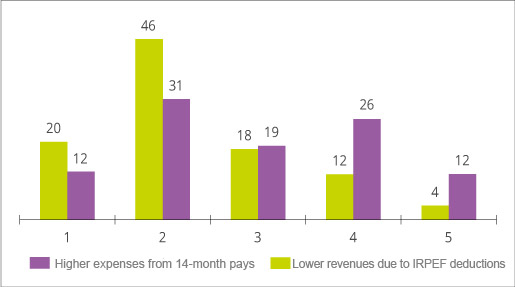 A significant part of the family welfare policies contained in the 2017 Budget Law has been destined to the retired persons. In fact, the government provided for an increase of the 14-month pension to low income retirees and IRPEF deduction for pension incomes. However, the overall impact of the measure is scarcely effective in terms of horizontal equity, since it takes into account only individual rather than household income and, more importantly, than other income accruing.

The Budget Law, in modifying the regulation of 14-month pay – that is the additional sum grated annually to low-pension retirees – first introduced in 2007, broadened the range of beneficiaries and increased its amount. It also widened the no-tax area, i.e. the income tax threshold for IRPEF exemption.

The distributive effects of the measures provided for in the Budget Law can be appreciated by analyzing the percentage distribution of the higher expenses for the 14-month pays and the lower revenues due to changes in IRPEF for quintiles of equivalent household income in Tuscany. Both measures are benchmarked against the personal rather than the household income, consequently the distributive effect cannot be given for granted. The 14-month pay covers by definition only low pensions, but it cannot promise that it will benefit families in the lower sections of income distribution. Besides, recipients may hold more than just one retirement pension, which together grow their overall revenue. The changes introduced in the IRPEF rates provide for a system of decreasing deductions for larger individual incomes, but conceivably they favour pensioners with a personal income below even the level of 55,000 Euros.

The higher expenses deriving from the increase of 14-month pays concern 67% of families in the first two quintiles of the equivalent household income distribution, but, at the same time, a 15% of expenditure is destined to benefit two of the richer quintiles. The latter effect is even stronger for IRPEF deductions, since the corresponding lower revenues derive from 62% of households in the first three quintiles, and 38% in the higher quintiles in the income distribution.