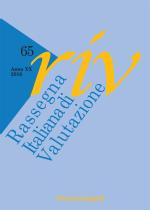 This paper proposes a governance framework, which relies on training providers’ evaluation to regulate the market of agencies and efficiently allocate resources between them.
The proposed model is based on three steps.
The first step consists in the creation of a profiling system that summarizes the level of disadvantage in the labour market of each trainee, based on his probability of (re)employment, estimated on a series of personal characteristics. Such a tool is necessary to correctly evaluate net performance of training operators and to prevent creaming or cherry peaking phenomena.
As a second step, the paper proposes the creation of a rating system of providers based on their net performance in terms of employment outcomes; in particular, an econometric approach based on multilevel modelling has been adopted to obtain an aggregation of training providers according to their high, low or medium performance level.
As a third step, the paper shows the hypothetical new allocation of resources based on the reward of best performers in terms of employment outcomes, comparing it to the actual onetraining providers, unemployed, training.