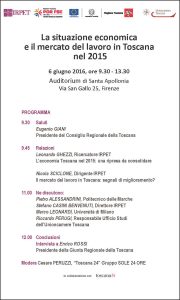 Finally, 2015 marked a clear recovery of regional economy for Tuscany. Once again exports, still leading demand, proved to be the most vigorous component of the economy, which was also supported by a resurgence of household consumption, pushed by an increase in purchasing power occurred after years of decline. The region’s positive result, still greater than the country’s average, is also noticeable in the labour market. Due to the effects of reduction in social security contributions, the stable component of employment has enlarged, even though job opportunities have not evenly affected the working population. In short, despite the trend reversal, employment recovery is still limited and imbalanced.
For the coming months, Tuscany’s economic prospects are still better as compared to Italy, confirming the positive signals observed in 2015 for both the economic and employment processes, but they are likely to have a moderate impact, considering the long recessionary downturn experienced by the region.