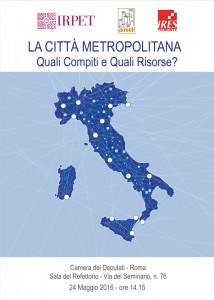 The reconsideration of the present institutional architecture of our country follows a twofold aim: on the one hand, to re-establish consistency between the real boundaries of communities and the formal boundaries of collective decision-making institutions (so as to favour the possible exploitation of scale and scope economies), and on the other to speed up the public decision-making process (so as make the whole country more responsive to the economic cycle). The establishment of the Metropolitan City certainly represents a milestone in this process.
This project is supported both by Europe – given that metropolitan cities will play a junction role in international policies intended to strengthen cohesion in the area – and enterprises – since it should fuel the demand for competitiveness from large urban agglomerations.
What is needed to meet so many expectations is to pinpoint the resources that are most consistent with the tasks assigned to this authority, both in terms of governing a vast area territory, and of planning and designing investments. Such resources may be found in the context of transferred functions and Community-funded interventions, while the principle of benefit and the international experience emphasize the agglomeration economies and the category of city users.