The Territory: the Hills, Sea, Towns and Mountains

Tuscany is located in central Italy and is bathed by the Ligurian and Tyrhennian Seas. The coastline stretches along the western side of the Apennines and includes the islands in the Tuscan archipelago. Monte Pisanino (1946 metres), in the Apuan Alps, is the highest peak in the region. Off the coast there are numerous islands, amongst which Elba, the third largest in Italy. The main river is the Arno, which flows through Florence and Pisa. The region borders with: to the NORTH-WEST, Emilia-Romagna to the NORTH, Marche and Umbria to the EAST and Lazio to the SOUTH-EAST. Triangular in shape and with a homogenous territory, Tuscany covers an area of 22,997 km² (corresponding to 7.6% of the area of Italy), and it is the fifth largest region in Italy.
The main city of the region is Firenze, in its province live the 27% of regional population, the other main provincial towns ar Arezzo (9%), Massa (6%), Grosseto (6%), Livorno (9%), Lucca (11%), Pisa (11%), Pistoia (8%), Prato (7%), Siena (7%).
Highest mountains: Monte Pisanino 1946 m, Corno alle Scale 1945 m.
Longest rivers: Arno 241 Km, Ombrone 161 Km, Serchio 111 Km.
Biggest lakes: Laguna di Orbetello 26,2 Kmq, Lago di Massaciuccoli 6,9 Kmq, Lago di Chiusi 3,9 Kmq, Lago di Montepulciano 1,9 Kmq.
Biggest islands: Elba 223,5 Kmq, Giglio 21,2 Kmq, Capraia 19,3 Kmq, Montecristo 10,4 Kmq, Pianosa 10,3 Kmq. 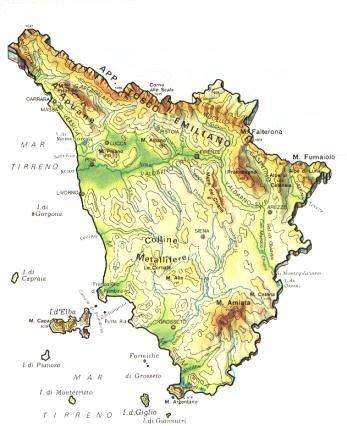 When reading an article or watching a television programme on Tuscany, often you will see a gently undulating landscape, with rows of cypress trees, a tower or a farm in the background, and a tidy vineyard or twisted olive trees in the foreground
In some cases it may just be a conventional choice, a stereotype because the operator can’t be bothered finding anything else: nevertheless, this common image is not without foundation. Indeed, the landscape of Tuscany is dominated by hills: two thirds of the territory consists of hills, one quarter of mountains, plus a few flat areas to the west and along the coasts (8%).te.

This profile of Tuscany’s territory is rather different from the national average, which mainly consists of mountains and plains. Against this background, an age-old agricultural tradition has designed the current face of the Tuscan countryside: that unmistakeable succession of well-kept farms, country houses, villas and noble residences.
Today, except for in some flat areas, the Tuscan countryside is increasingly characterised by vineyards and olive groves: resulting not only in a great quantity of products, but also great quality that is widely recognised on international markets. Cultivating vines and olive trees also means taking care of and defending the landscape, and protecting its environmental characteristics. Therefore, over recent decades, there has been an intense process that has led to an increase in the exploitation of the land for agricultural purposes and resulted in the renovation of the real estate, with the old country houses being restored for residential use and tourism. Therefore, today the Tuscan countryside is not just a source of agricultural income but also big profits and the place where new services are produced.

Obviously, Tuscany is not just hills and woods: the sea also goes to make up its image and profile. There are 633 kilometres of coastline in Tuscany (accounting for 8% of the total coastline of Italy), most of which is suitable for swimming. In addition, the number of marine parks is amongst the highest in Italy, preserving the coast from human activities that are incompatible with protecting the environment.

If Italy is the nation of the “hundred cities”, then Tuscany is the region that best represents this: even in recent decades its rich urban fabric, whose origins go back to the era of the medieval communes, has continued to be the web upon which the modern characteristics of Tuscany are based.
Today Tuscany has 287 municipalities, with a population that mainly lives in cities and medium-sized towns, which are an essential part of the region’s economic and production structure, as well as living proof of a past rich in municipal traditions. Over the span of just a few decades, a very original industrialisation process has radically transformed the social scene in Tuscany. Nevertheless, these intense transformations have not upset the identity of the region and have not put paid to the social integration and cultural bonding of the local communities; the rural population has diminished but the countryside has never truly been abandoned; two large metropolitan areas have formed (around Florence and around Pisa and Livorno), but an urban fabric with a large number of different centres has also become consolidated.

The Importance of Tourism

And finally, the Tuscany of tourism and international exchanges, endlessly nourished by the variety on offer: around 42 million presences per day in tourist accommodation (48% of whom foreigners), more than one quarter of whom concentrated in Florence (27%). Also recording high figures are Livorno (18%), Grosseto (14%), and the Tuscan archipelago (around 7%), plus Versilia and Siena.

In Tuscany we can speak of a network of tourism services that revolves around the system of local institutions and the recently reformed APT tourist boards. The APTs are public organisations with an extremely streamlined management system. In terms of functions, they depend on the provinces, and their specific task is to provide tourist information and assistance, to set up special offices, enhance tourist destinations and the services available in their territory. Tuscany is divided into 15 APT tourist boards. 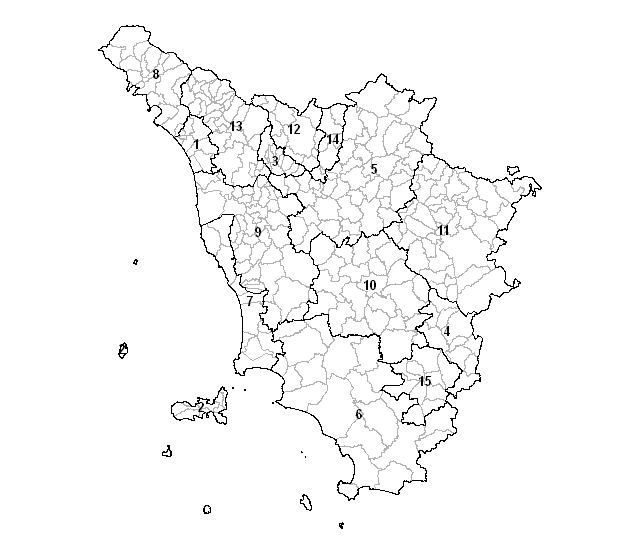 Tourists are given information and welcomed in 220 offices managed directly by the municipalities, provinces and APTs or private associations, in particular the non-profit Pro-Loco associations for promoting tourism in small towns.

A Bit of History

The Arno valley was inhabited by the Etruscans, who gave the region its original name (Etruria). The name Tuscia (which evolved into Tuscania and Tuscany) was taken on towards the end of the III century by order of Diocletian (281 AD) who united the region with Umbria. Once the Empire collapsed, Tuscany was overcome by the Barbarian invaders and then fell under the dominion of Odoacer and the Goths. Devastated by the Byzantine war to regain the territory (535-553), it was then occupied by the Lombards, under whose rule it was united in a duchy with Lucca at its centre, the town which continued to be the capital under the Franks. The title of Marquis of Tuscany, adopted by the count of Lucca Adalberto (845-898), then passed to the Attoni family, previously the lords of Canossa, who united the marquisate of Tuscany to the dominions of Modena, Reggio and Mantua to form the March of Tuscany. Subsequently, the region broke up into numerous commune states, whose rivalry exploded with the death of Matilde di Canossa (1115), the last of the Attoni family. The region became united once again thanks to the victory of Florence over Pistoia (1301), Arezzo (1348), Pisa (1406) and Siena (1557). Following the action of the Medici family in the commune of Florence (1430), which became a duchy in 1532 after the Republic of Siena was defeated (1555), Tuscany was unified with the sole exception of Lucca, Massa Carrara and the Presidi coastal state. A grand duchy as of 1569, its cultural supremacy was at the forefront of the Italian Renaissance. The Medici family died out with Giangastone (1737), and Tuscany was handed over to the Lorraines who, except for the Napoleonic period, ruled until 1859, promoting the economic development of the region. In 1848, radicals forced Leopold II to flee, resulting in the establishment of a Guerrazzi-Montanelli-Mazzoni triumvirate, after which the Guerrazzi family alone stayed in power. The Lorraine dynasty was brought back to Florence by the Austrian troops, pitting the people against them. Ten years later, Grand Duke Leopold II was forced to abandon Tuscany for good and on 11th-12th March 1860 a plebiscite made Tuscany part of the new Italian state.

Tuscany is considered, and by no means by the Italians alone, a pleasant region to live in; a region with a high quality of life, both in terms of the average income per family, and the particular surroundings and social context that characterises a great part of the region. The services offered by the social services and the regional health system are also generally considered high quality and clearly superior to those offered in other parts of the country.

The Artistic and Historic Heritage

A particular characteristic of the quality of life in Tuscany lies in its wealth of heritage and cultural activities: of course, not just the wealth of historic heritage inherited from the past, forming the fundamental feature of the region’s image and the basis of its strong attraction for tourists, but also and to no lesser extent, the wealth and variety of activities and cultural customs that take place in the region.
Take museums for instance: according to a reliable censure carried out at the beginning of the 1990s, in Tuscany there are 394 museums, the highest number of all the regions in Italy, corresponding to around 12% of the national total, also putting Tuscany in the lead regarding the “density” of museums in relation to the population (1.4 per 10,000 inhabitants). Also consider the Tuscan university system: there are three universities in the region (Florence, Pisa and Siena), of different sizes and with different features, but all of which are definitely among the most lively and prestigious centres of higher education in Italy. The National Research Centre also carries out important activities, as do other high level university institutes such as the Scuola Normale and the Istituto S. Anna in Pisa, and the Università per Stranieri in Siena.