9 February 2017
In Tuscany in figures
in Labour, Macroeconomics
0 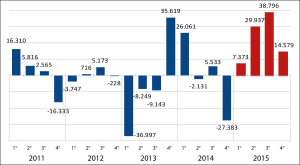 In 2015, the labour market has recorded clear signs of recovery in Tuscany. For the first time since 2011, employment has grown for two consecutive quarters, registering an overall increase of over 22 thousand units (+1.5% year-on-year). In line with what has been observed in the last four years, the working population keeps growing (+7,600 compared to 2014), which means that employment growth does not result in a corresponding reduction in the number of unemployed. The number of jobseekers declines by 15 thousand units, while the unemployment rate decreases to 9.2%, a figure that is still 4 percentage points above the pre-crisis levels.